SAYONARA CERRADO?
Brazil is a world leader on the natural stage – punching big with largest river, largest jungle, greatest biodiversity. But humanity seems determined to topple it where we can.
And yet there’s a biodiversity jewel just down the road that is even more at risk than the Amazon rainforest. The Cerrado, Brazil’s second most biodiverse area, with its mix of jungle and savannah, is being ruined twice as fast as the Amazon rainforest. ​
In just one month, an area double the size of the Isle of Wight was destroyed. Over one year, an area bigger than Ireland was deforested. 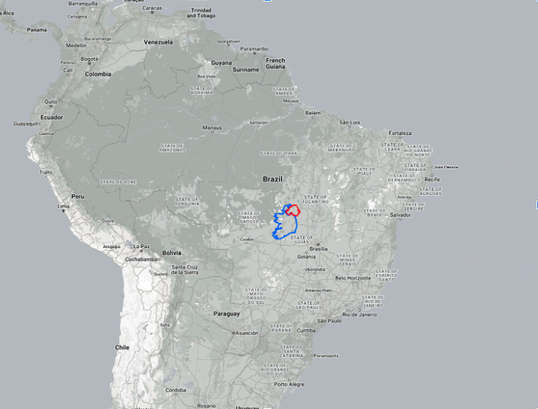 FROM WATER TANK TO FIRE RISK

The agriculture that has replaced the forest uses around 70% of the region’s water.  Not only that, but cutting down the trees reduces the rainfall which means the second largest underground water reservoir in the world is drying out. The Guarani Aquifer supplies the Amazon River but also the energy for 9 out of 10 Brazilians through hydroelectricity. There is now increased drought and fire risk. In just 6 months, the Cerrado had more than 10,000 fire alerts.
​If we don’t act now to protect and reforest this area in partnership with its indigenous owners, this unique and diverse natural jewel will be nothing more than a dusty barren landscape. At JUST ONE Tree we’re excited to be partnering with Eden Reforestation Projects to help save this critical habitat.

The Cerrado has around 12,000 plant species, a third of which are only found here.
​The Brazilian Buriti
​A large palm tree, which provides essential habitat and food for wildlife including tapirs, birds and monkeys. Local indigenous communities rely on the palms for food, shelter, and construction material.
The fauna around the Cerrado is mostly endemic, with more than 1,200 fish species, 864 birds, 390 amphibians and reptiles, 199 mammals, and 25,000 insect species. The various forests around the region provide a habitat for some of the Cerrado’s notable wildlife, including the giant anteater, the maned wolf, and big cats like the jaguar.
They remained isolated, out of fear of being enslaved, until researchers stumbled upon them in the 1960s, and they were granted indigenous legal rights to their land. In 2020 their land was recognised as an ICCA (Indigenous and community conserved areas) by the UN and the World Conservation Monitoring Centre (UNEP-WCMC).
​Despite only recent designation as an ICCA, like many other indigenous communities across the globe, the Kalunga has a history of good environmental stewardship. They plant in small hand-cleared areas that are used for up to four years, then left to rest and recover for another ten years.

What difference can we make?

​The Cerrado has a wet tropical climate in the summer and a dry but temperate winter. Thanks to this difference across the seasons, the Cerrado has a variety of grasslands as well as humid closed-canopy forests in wetter areas. This contributes to its huge biodiversity – making it Brazil’s second largest biome (area of high biodiversity).
​Hand in hand with the local Kalunga community, we will provide long employment and livelihood improvements, restore biodiversity and replenish springs and waterfalls vital to Brazil's water tank.
​With the joint effort of our fundraising and the hard work of the Kalunga community, we are targeting planting three quarters of a million trees by 2027.
PLANT TREES IN BRAZIL